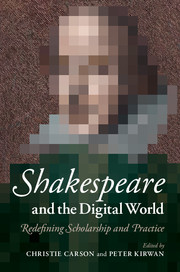 Shakespeare and the Digital World
Redefining Scholarship and Practice