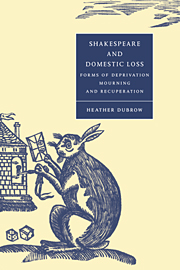 Shakespeare and Domestic Loss
Forms of Deprivation, Mourning, and Recuperation