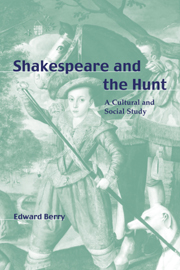 Shakespeare and the Hunt
A Cultural and Social Study