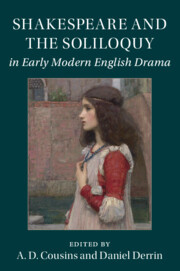 Shakespeare and the Soliloquy in Early Modern English Drama