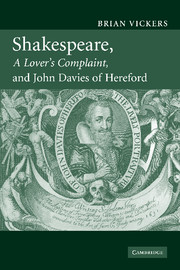 Shakespeare, 'A Lover's Complaint', and John Davies of Hereford