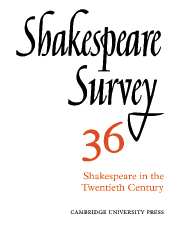 Volume 36. Shakespeare in the Twentieth Century