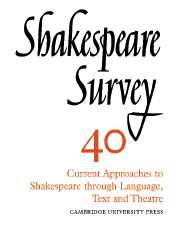 Volume 40. Current Approaches to Shakespeare through Language, Text and Theatre