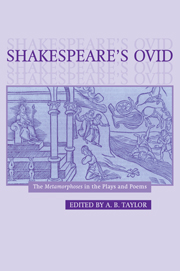 Shakespeare's Ovid
The Metamorphoses in the Plays and Poems