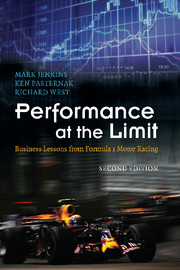 Performance at the Limit
Business Lessons from Formula 1 Motor Racing