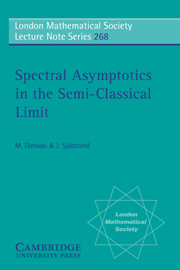 Spectral Asymptotics in the Semi-Classical Limit