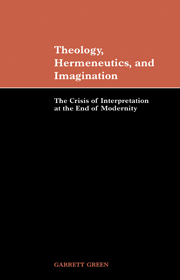 Theology, Hermeneutics, and Imagination
The Crisis of Interpretation at the End of Modernity