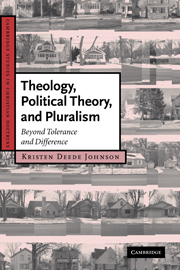 Theology, Political Theory, and Pluralism
Beyond Tolerance and Difference