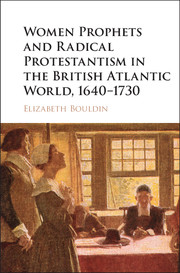 Women Prophets and Radical Protestantism in the British Atlantic World, 1640–1730