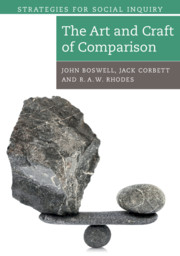 The Art and Craft of Comparison

Part of Strategies for Social Inquiry