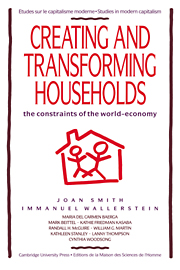 Creating and Transforming Households
The Constraints of the World-Economy