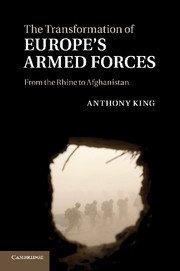 The Transformation of Europe's Armed Forces
From the Rhine to Afghanistan