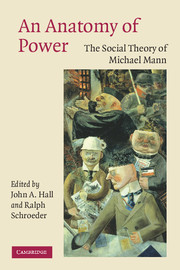 An Anatomy of Power
The Social Theory of Michael Mann