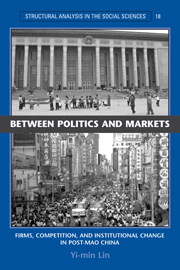 Between Politics and Markets
Firms, Competition, and Institutional Change in Post-Mao China