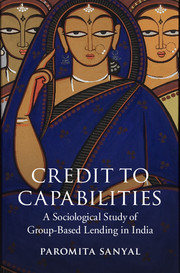 Credit to Capabilities
A Sociological Study of Microcredit Groups in India