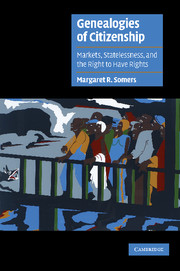 Genealogies of Citizenship
Markets, Statelessness, and the Right to Have Rights