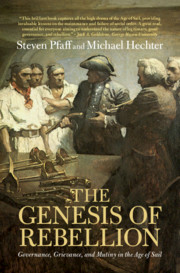 The Genesis of Rebellion
Governance, Grievance, and Mutiny in the Age of Sail