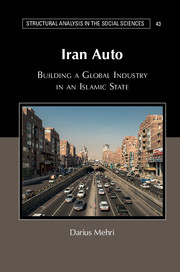 Iran Auto
Building a Global Industry in an Islamic State