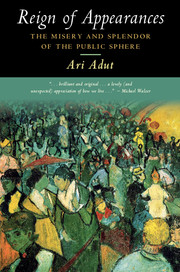 Reign of Appearances
The Misery and Splendor of the Public Sphere