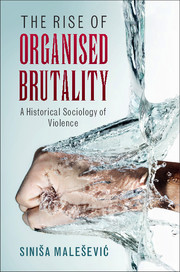 The Rise of Organised Brutality
A Historical Sociology of Violence