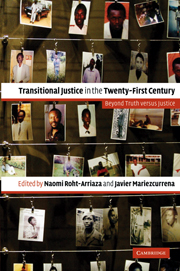 Transitional Justice in the Twenty-First Century
Beyond Truth versus Justice