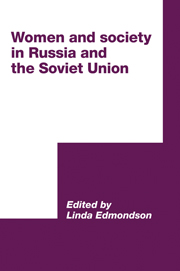 Women and Society in Russia and the Soviet Union

Part of International Council for Central and East European Studies