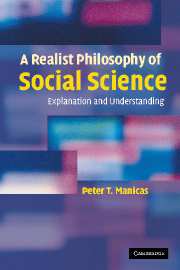 A Realist Philosophy of Social Science
Explanation and Understanding