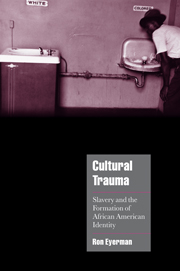 Cultural Trauma
Slavery and the Formation of African American Identity