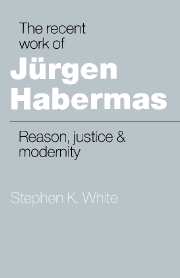 The Recent Work of Jürgen Habermas
Reason, Justice and Modernity