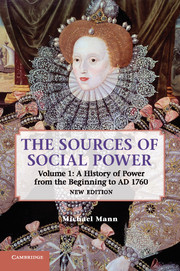 Volume 1. A History of Power from the Beginning to AD 1760