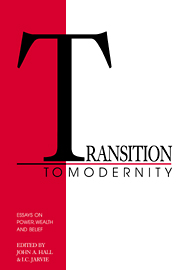 Transition to Modernity
Essays on Power, Wealth and Belief