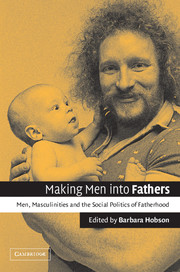 Making Men into Fathers
Men, Masculinities and the Social Politics of Fatherhood