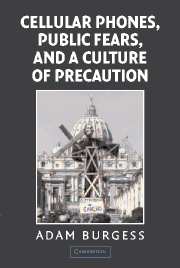 Cellular Phones, Public Fears, and a Culture of Precaution