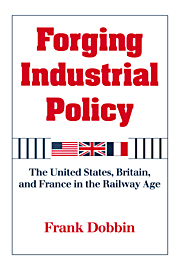 Forging Industrial Policy
The United States, Britain, and France in the Railway Age