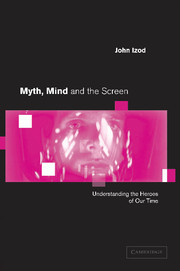 Myth, Mind and the Screen
Understanding the Heroes of our Time