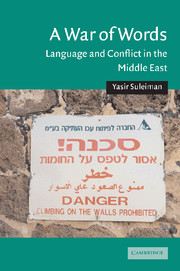 A War of Words
Language and Conflict in the Middle East