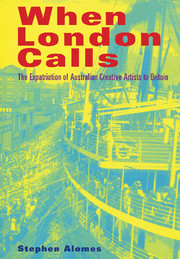 When London Calls
The Expatriation of Australian Creative Artists to Britain