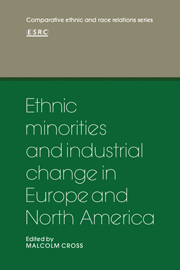 Ethnic Minorities and Industrial Change in Europe and North America