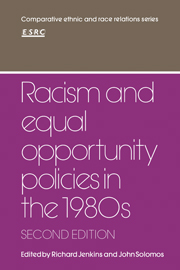 Racism and Equal Opportunity Policies in the 1980s