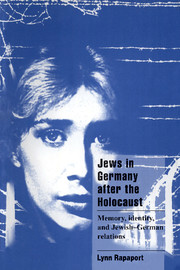 Jews in Germany after the Holocaust
Memory, Identity, and Jewish-German Relations