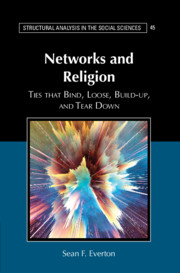 Networks and Religion
Ties that Bind, Loose, Build-up, and Tear Down