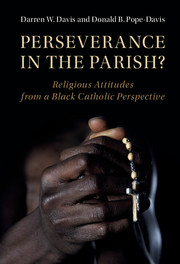 Perseverance in the Parish?
Religious Attitudes from a Black Catholic Perspective