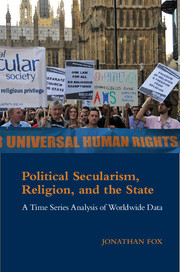 Political Secularism, Religion, and the State
A Time Series Analysis of Worldwide Data