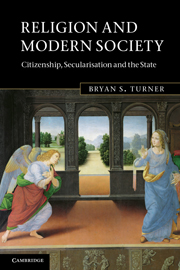 Religion and Modern Society
Citizenship, Secularisation and the State