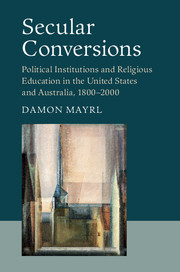 Secular Conversions
Political Institutions and Religious Education in the United States and Australia, 1800–2000