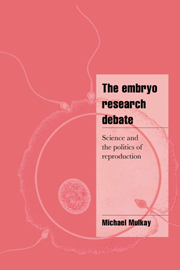 The Embryo Research Debate
Science and the Politics of Reproduction