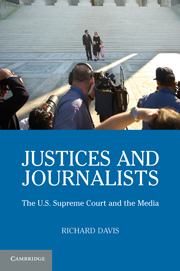 Justices and Journalists
The U.S. Supreme Court and the Media