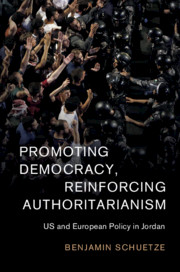 Promoting Democracy, Reinforcing Authoritarianism
US and European Policy in Jordan