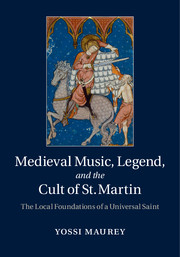 Medieval Music, Legend, and the Cult of St Martin
The Local Foundations of a Universal Saint