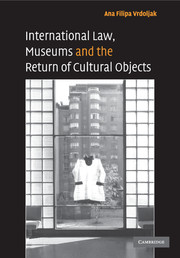 International Law, Museums and the Return of Cultural Objects